They row canoes across the beach searching for tigers and fairies called Happy. They climb mountains and make princess castles in the sand.  In the meantime we sit, drink vodka limcas and pay the nearest five year old five rupees to watch they don’t drown.

Does that make us bad parents?

I keep asking this question a lot lately. When I first paid a visit to the German run (free play rules) nursery I sat gingerly on the packed earth floor and thought, ‘hmmm, this is nice, rustic – but lovely…my GOD the children are FILTHY.’ Then I picked up Alula after her first day and it gave filthy a new name. I almost didn’t recognise her under the grime. I guess that’s what happens when you combine free running snot with free play in the dirt. Every day reminds me of that scene in Aliens when Sigourney Weaver finds that girl Newt and tries to clean her up. ‘There’s a girl underneath there,’ I say as Alula streaks naked through the house screaming like the shower is the mother alien come to get her and lay its eggs in her brain.

Does that make us bad parents?

Then we were invited to our Tuktuk driver’s house for lunch – a strange, awkward affair under a corrugated iron roof, Lula playing on their plywood bed whilst we ate off a plastic table and tried to make small talk about Hindu gods and Hindi music – neither of which I know anything about – and his kids were trotted out, pristine, polite, perfect. Hair oiled, parted just so, white shirts pressed, handkerchiefs safety pinned in triangles to their shirts, huge white smiles. I looked at Lula, filthy and barefoot, wild and singing to herself about fairies and thought ‘what must they be thinking of me?’

So I asked Cami, my waxer/masseuse, how come Indian kids are so clean and polite. And she said it’s because their parents beat them.

So now I don’t feel so bad. 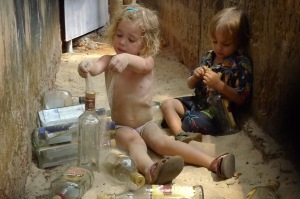 Alula and Noah hang out in booze alley 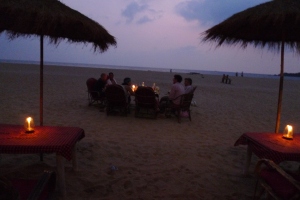