Money; I once wrote that amongst the things I wish I had known before starting this was how much more money it was going to take than you naively think. I don’t know why I’m using you there, I mean I. You are probably handier with a calculator and more endowed with common sense than I am. I shouldn’t tar you with the same brush as me. Our (doing it again) – my first calculations, randomly scrawled on the back of one of Lula’s nursery drawings, were of the ‘India’s cheap – what do you reckon? A tenner a day?’ variety. I did this for every country and ended up with a figure of about £8K. I remember feeling clever for adding on 20% for emergencies and then I wondered if I’d not eaten a packet of percy pigs nor drunk a frappacino every day how much more money we’d have for the kitty.

What I didn’t add on were wardrobe emergencies – I never anticipated that, after six months of wearing the same ten items of clothing, I would slide into a consumerist fashion spending spree and not content with raiding the local market for hot pink shorts jump suits and fake raybans I would have a whole new wardrobe ateliered for me.  Didn’t budget for that, neither did I budget for how many bags, toys, Tupperware lunch boxes, rubber ducks and toothbrushes Lula would get through. Forgot also to budget for essentials like vodka and massages and suncream. Which could be why when I hesitatingly checked our bank balance I almost reeled backwards and passed out. I had to check the statement carefully for signs of credit card fraud. Unfortunately there were none. Just cash withdrawal after cash withdrawal – often three withdrawals on the same day.

And we are on the threshold of July and have yet to hit the most expensive stops on the route – Australia and the US. At this rate we will be couchsurfing en famille and freeganing our way back to London (I just read the definition of this and am laughing laughing laughing at it and me in the same sentence). And I had so many things to buy in America – visions of myself in a frothing frenzy in the Apple Shop, American Apparel and Urban Outfitters – are dissolving and being replaced with ones of me in a YMCA dorm sharing a bed-bug ridden bunk with Lula whilst John wraps up on the street outside in yesterday’s newspaper.

Still on the bright side at least I am the owner of some very nice couture dresses. It’s not all bad. 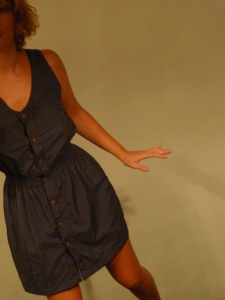