Today has been magical. I tried to think what particular thing was making me feel so happy and in the end I realised it was the sum of its parts.

A morning cuddle with Alula where we argued about who loved each other more and I won again (because Alula hasn’t quite understood the concept of plus one).

Eating a cornetto for breakfast (it was a mini one and um we were out of cereal. No we weren’t. I’m lying. I just felt like eating ice cream).

Spying four volcanoes on the drive back from school. Even Mount Agung – the most shy of all the volcanoes on Bali, normally so cloud shrouded that when it does occasionally appear it’s like it’s a spell or an illusion cast for the day and I feel I can wish on it.

Getting to watch an episode of Prison Break at 9am because I’ve finished writing my fourth book so I feel I’m entitled to do what I like at 9am.

Going swimming and just listening to my ipod by the pool rather than pounding lengths trying to work out who said what and who did what in the chapter I’m writing.

Having my front veranda filled with Balinese friends popping by – one of whom then very kindly knocked down the wasps’ nests building in the rafters over John’s desk whilst I cowered behind the door. He then gave the wasp grubs to Alula and Dil to feed to the fish. They thought it was very exciting. So did the fish.

Getting new fish for the pond (I killed the last three).

Managing to say ‘food for the pig’ in Indonesian to the gardener Wayan and have him grin at me AND understand me. Most importantly. And also learning how to say ‘the fish eat the wasps’ (ikan makan tawon).

Coming home and having lula yell ‘satu lagi ‘bu’ at me. ‘One more, mummy!’ (she’s learning!)

Phoning the Taco Casa & Grill and having them answer it thus: ‘Good evening Sarah. How are you?’

Having a friend make me coffee with coconut cream, cacao and spices.

Bumping into lots of people I know just on the way to buy quinoa.

Finally getting around to buying a bookshelf! A home for my stack of dust covered books. Excited doesn’t cover it.

Lying in bed with my laptop and 16 more episodes of Prison Break ahead of me. 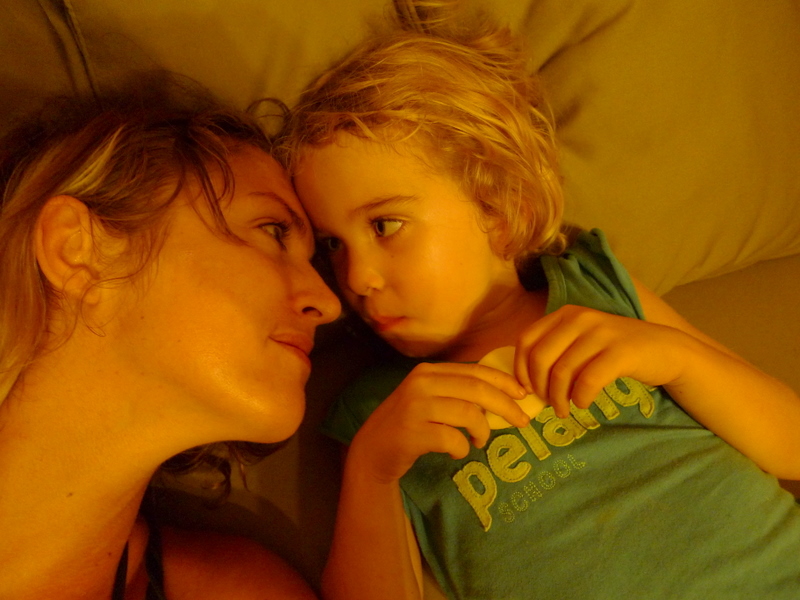