Everywhere we go we are watched. I feel furtive. As if a hand is about to fall on my shoulder and ask me please to come this way. I feel as if I’ve got a piece of priceless art stashed in my bikini (some might say I do, but you know I like to be modest).

I try to look like I belong. I lift my chin, roll my shoulders back, walk purposely, but still I feel their eyes on the back of my head, even following me into the ladies’ changing room, ostensibly to wipe the pristine marble surfaces but I know it’s just a ruse, that it’s leading to this….

‘Oh yes?’  (fixed grin but the eyes are roaming to my flip flops thick with dust).

‘Urhuh,’ I do like, other than feeling like I’m being trailed around Primark by an over-zealous security guard every time I step foot outside of my room.

And then, the final question in every conversation, ‘What room you stay in?’

At which point I think about saying, ‘Oh, I need to stay here to use the sauna / steam room / Jacuzzi / pool? Really?’

Instead I mumble, villa 9, then grab my things and slink back to my villa feeling their eyes on me still, even the gardeners. I don’t think they’re gardeners, I think they’re trained SAS operatives, put in amongst the rhododendrons to jump on anyone who isn’t a bonafide guest.

I wonder if they do this to Robert de Niro when he stays here.

Or Posh and Becks.

They just do it to me. And to John.

I kind of wish they’d just take mugshots of me and circulate amongst the staff.

I get that it is because I don’t look chi chi rich. Or like Robert de Niro.

In the lobby I spot the wealthy Americans in their big hats, with their protractor arched eyebrows, Hermes bags (and not the fake ones) and gold bracelets as big as halos. I’m in my tatty old gap sundress, $1 flip flops, with my hair tied in a knot (forgot my brush), and holding a carrier bag. I can see why they feel the need to follow me into the bathroom. But still…

My friend Leila showed up for the afternoon to play. If I look like I don’t belong here, well, then Leila who usually dresses as if every day is Burning Man and she’s just arrived there from her sell out show supporting Lady Gaga in Vegas, really doesn’t look like she belongs here. But the joy of Leila and being with Leila is she doesn’t give a shit what anyone thinks of her. And it rubs off. Everyone should be more like Leila.

We sauna, we Jacuzzi, we use every lotion, potion, cotton bud, implement they have been foolish enough to leave out  and about five hundred and twelve towels during our one hour in the spa. Then we come back and watch the Matrix on the supersize tv, whilst ordering French fries from room service and a brownie which costs $18 and which we send back after eating half (and all the ice-cream) because it really tastes like rubber and we know we can get better ones from Bali Buddha for just a dollar.

Under the stars we sit on the deck and Leila turns to me and says, ‘Woah, remember we said that our intention was by next new year we’d be super rich and celebrating new year at the Four Seasons?’

I stare at her and we have one of those moments where we realize our intention has come true six months early and ten times more impressively than we had even hoped for.

Ok, not the super rich part….YET. But we haven’t paid for this. I won a two night stay here on a raffle for which we were selling the tickets (shhhhh). There was no corruption involved. 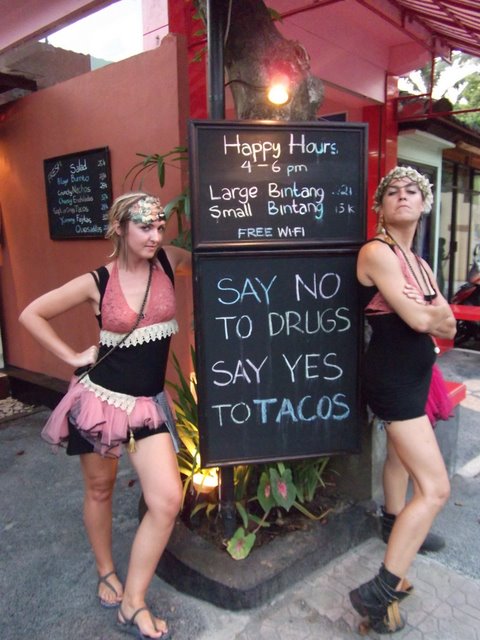 remember when we were raffle girls?!

We are a bit off our faces but we quickly make new intentions realizing that clearly we are magical beings who possess a direct line to the universe.  A universe who wants to bestow wonderful things on us.

‘Quick,’ I say, ‘Let’s make more intentions. Because anything we want will clearly come true.’

This time I’m not going to wish for stuff I think I want. This time I know exactly what I want.

And it doesn’t involve being followed by beady eyed staff through lobbies of burnished wood.