Alula and I decided that to mark the end of days (ahem) we would spend an entire day in Ubud doing everything we loved most. As it turned out that mainly involved eating.

Before we left the house we wrote a bucket list of the best things to do in Ubud. And yes, that does say ‘buy a penis bottle opener from the market’ because a) we have wondered for 5 years who buys a penis bottle opener and b) figured that no one does so we should buy one to make the sellers feel better and c) we thought we could give it to John as a stocking filler memento of Bali d) we don’t have a bottle opener. 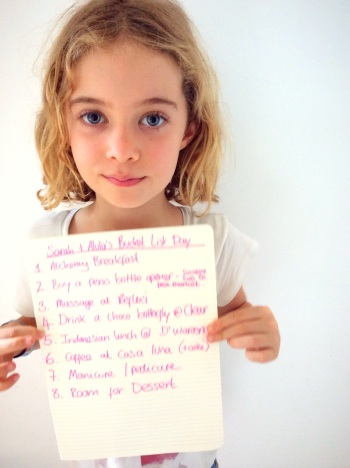 1. We started off by walking up the street to Alchemy.

Now, it’s a well known fact that I normally avoid this place like the plague. Not because the food isn’t good but because the people in there drive me batty. If you’re not wearing tasselley Lycra yoga pants or feather earrings then people stare at you like you’re an alien which is ironic because – true fact – most of them believe themselves to be descended from the Pleidians – a superior alien race.

Also people read books like ‘Finding your inner Goddess’ or ‘Tantric breathing for beginners’ and have really loud conversations with each other about how they’ve just found their bliss or just come from a drum circle or are about to go for a shamanic colonic hydrotherapy session and that’s why they have only been drinking coconut water for the last fifty days.

But… and here is the but… the breakfast bar at Alchemy is amazing. It’s one of my favourite places for breakfast in Ubud (the other being Vespa). Alula agreed with me whole-heartedly. You just have to ignore the conversations going on around you. 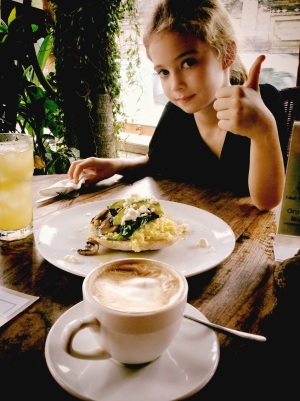 The other best breakfast in Ubud – at Vespa Cafe. Get the flat white, and the mushroom and spinach.

2. Then we drove into town and went to our favourite massage place, stopping first for coffee at Tutmak which is one of the best places in town for coffee (their cafe au lait is served in a BOWL people. A BOWL.) Alula wants to give special mention to their cinnamon buns too. They’re good.

The Reflexi Massage shop on Dewi Sita might not look like much from the outside but let me tell you these guys totally know what they are doing. When they press on a point on your foot and you go ‘ahhhhhh that hurts. What corresponding point is that on the body?’ they can tell you straight up. Usually with me they say: ‘that your liver’.

Agus, July or Yoga are your guys. And the best thing is you don’t get oily because it’s done fully-clothed. 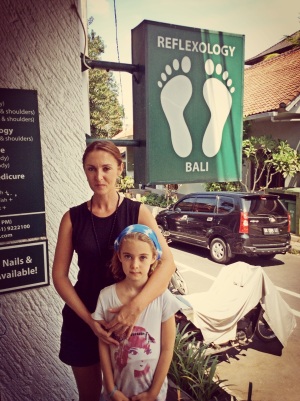 Alula’s in for a reality shock.

3. After an hour and a half massages we floated out and went to Clear Cafe on Hanoman which was where I wrote a lot of Losing Lila. This place does the most scrumptious drinks. Try the choco butterfly and the strawberry and white chocolate milkshake. Alula then had to try all the food tasters in the little shop next door.

4. Then we went to the market, which would NEVER be on my list of best things to do in Ubud because frankly it’s horrible and it’s hot and everywhere you go people are thrusting things in your face telling you ‘good price’. It’s mainly tat piled on tat with some more tat thrown on top of that. But it is the place to go for a penis bottle opener. Also we wanted to buy some sarongs for Alula’s teachers and a God or two to accompany us back to the UK. We settled for the Buddha, who I had to explain to Alula wasn’t a God, and a Ganesha.

5. We decided that our next port of call would be D’Warung – our favourite Indonesian restaurant in the whole of Bali. It’s owned by the lovely Kadek and we’ve been coming here since we first arrived in Bali. The food is fantastic and Kadek also does really great cooking classes where you actually get to cook and not just watch. Not that I’ve done this course because, um I gave up cooking, but Alula and John have done it.

We stuffed ourselves some more on tuna steak and ayam (chicken) and rice.

6. Full, but still aware that we needed to complete our mission, which really was turning into a food tour of Ubud, we weighed our options for dinner, deciding on sushi because it’s Alula’s favourite food in the world ever and she wishes she was Japanese.

Manmaru is our favourite Japanese restaurant in town – I’m so addicted to their spicy tuna fry that I have been known to leave social gatherings claiming I’m going to get something from the car, jump behind the wheel, speed off, run to Manmaru, order spicy tuna fry, eat them all, then run back to where the gathering / party is and saunter in twirling my keys saying ‘sorry I just couldn’t find what I was looking for in the car.’

7. We would then have gone to the best wine / dessert place in town – Room for Dessert  – which is the kind of place you go to and they know your name and bring you extra desserts when it’s not even your birthday and which has a secret back garden that isn’t advertised and is only for people in the know (which includes you now) and which serves great local street food –  BUT they’re closed on a Monday. Damn them. So we will go there on Wednesday instead. Their choco bubble dessert is worth flying all the way to Bali for from the UK.

8. Because they were shut we went for ice cream at the best gelato shop in what I suspect is the whole of Indonesia, maybe the world. I used to live in Italy, two steps from what was claimed to be the best ice cream place in the whole country, so I feel like I am knowledgeable enough about gelato to say that Gaya is up there in the rankings.

So there you go… that was our day.