I know, I know, it looks like all I do is swan around Ubud eating and having massages… but like your Facebook feeds from friends, what you see is a curated version of my life… the reality is I’m awake at 4.30/5am most mornings and that I am working pretty much non-stop until Alula gets home from school. At the moment I have three books to write by June, all under contract. That is approximately 250,000 words.

Lots of people ask me where I get my ideas from when it comes to my books. With my last book – Out of Control – I was inspired by the following random things:

– A story my friend Lauren told me about being 18 and on the subway in New York when the lights cut out. It was a really terrifying story and one that stayed with me and made me want to set a story there.

– Ryan Gosling (because he pretty much influences all my book heroes). But really I loved the character he played in Drive and so I decided to make my male character a car thief / getaway driver.

– Terminator – This movie was one of my favourite movies as a teenager. I love it. I had to put a homage to it in my book and the opening scene, set in a police station that gets hit up by two gunmen, is that homage.

The book I wrote, inspired by all these things became Out of Control. Here’s the blurb:

When 17 year old Liva witnesses a brutal murder she’s taken into police custody for her own protection. But when the police station is attacked and bullets start flying it becomes clear that Liva is not just a witness, she’s a target.

Together with a car thief called Jay, Liva manages to escape the massacre but now the two of them are alone in New York, trying to outrun and outwit two killers who will stop at nothing to find them.

When you live on the edge, there’s a long way to fall

Why am I telling you this?

should totally buy it and tell all your friends (insert smiley face emoticon). 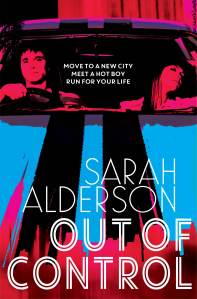