I was really, really sick last night. I projectile vomited a punnet of cherries – just like in that scene from Stand By Me when the fat kid (nicknamed Lardass – co-incidentally that happens to be my brother’s name for me) swallows a litre of cod liver oil and then eats a dozen cherry pies all as part of a revenge plan to projectile vom over his bullies. It was really quite gross. On the upside I gave my stomach muscles a better workout than a thousand sit ups could ever and woke up a few pounds lighter (with my head still spinning). 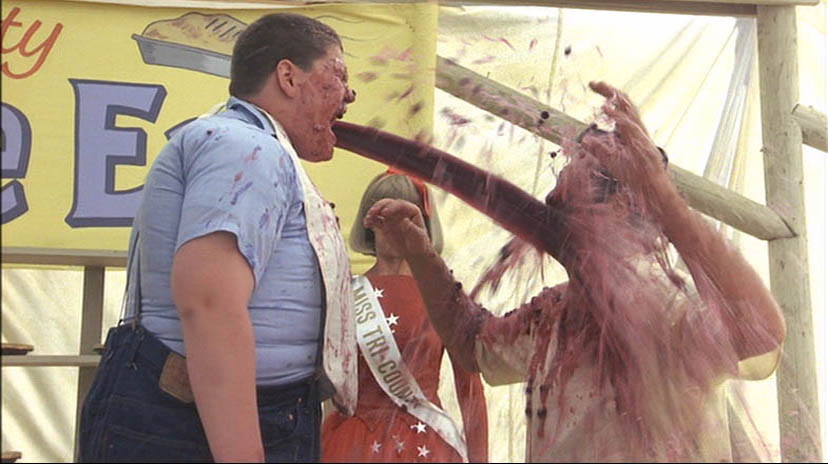 (This was me, except over a toilet bowl and not Alula).

Luckily Alula was there to play nurse. She brought me water and patted my head and ran me a cool bath, then watched Horrible Histories while I wove in and out of consciousness and contemplated dying. Bless her.

Want to know why I was so sick John almost called an ambulance when he got home from work and found me passed out, naked on the bed with Alula pressing cold cloths to my head? I had heat stroke… yeah. Five years in Bali and never so much as a sun burn. One hot day in the UK and I’m collapsing and projectile vomiting and garbling nonsense.

What is with that? I guess I’m just not used to the sunshine any more. I had been sitting in a car (with the windows and doors open) waiting for Alula’s dance class to finish, listening, get this, to my meditation tape (if you’ve followed me for years you’ll laugh at this because meditation was something I could never manage in Bali but is something I’ve been doing religiously since getting back to the UK – I guess I need it more here), when suddenly I came over all funny and faint, as if I’d just drunk a bottle of meths.

I am possibly the first person to almost die from meditating. Claim to fame. It’s just lucky I was only doing a twenty minute tape and not an hour one (as if).

I knew straight away that I had heat stroke because I am susceptible to it having had it once before when I was 20 when I sunbathed for four hours in Mexico in about 90 degree heat, hydrating myself only with four frozen margaritas. You’d think I’d have learned from that epic mistake. But it’s one thing to almost die after drinking copious amounts of alcohol on a beach in Mexico and quite another to almost die while meditating in a Mini Cooper in a car park outside a sports centre in Marlow.

Though at least I would have died enlightened and not drunk.