Alula and I drive past a  fifty foot high horse and Alula asks:

What’s the horse for?

– Yes. He died and they’re having a cremation.

– It’s something they do when people die.

So will they take him to the not dead doctors and make him better? Will they make him alive again?

What do they do to the horse?

– They burn the horse.

And the King is in the horse?

But if they burn the horse won’t he die?

– He’s kind of already dead. He died two months ago. (I don’t mention the digging up of his body by his relatives after two months which is how long it’s taken to prepare for this event next Tuesday).

But what happens to him?

– (pause) The horse takes him to heaven

But you just said they burn the horse.

And will he come back after that?

– It’s when you die and come back as somebody else. Your soul transfers into a new body. Kind of.

What does soul transfer into a new body mean? 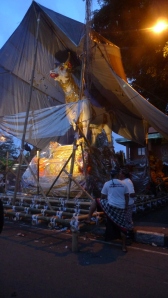