“I’m planning on being a nicer person when I’m back in England.”

‘You are a nice person already,’ I tell Alula.

‘I think I could be nicer. I’m already practicing,” Alula informs me.

I feel humbled into silence by my eight-year old daughter’s level of emotional intelligence and self-awareness.

Feeling I need to up my own game, I nod and say; ‘I think I could be a nicer person too. I need to be less grouchy and more patient. My patience is a little thin these days because I have a lot on, three books to write, an entire house to pack up, you to look after, and no daddy around to help out.’

Alula cocks an eyebrow at me. ‘Mummy, your patience is always a little thin.’

‘I think you could swear less too.’

OK, now I feel wretched, as ashamed as if I’m standing at the pearly gates in front of Archangel Michael himself (is it him at the gates or at I getting my archangels confused?) listening as he reads off a list of all my wrongdoings. We could be here until the second coming, I think to myself. It appears as if Alula is just getting into her stride. She’s ticking things off on her fingers now.

‘You could also perhaps be a little kinder,’ she says. ‘You know, for example when children ask for something and don’t say please instead of saying ‘you’re not getting anything until you remember your manners,’ you could say ‘what’s the magic word?’ instead.’ She pauses. ‘And smile when you say it.’

I wrinkle my nose at her. This is how I imagine a North Korean criticism session or a Scientology auditing session might feel (though admittedly with a lot less terror and no Tom Cruise). My amazement at her maturity is being eroded by the ten year old inside my head who feels like stamping her foot and storming off to her bedroom, slamming every door in the house on the way. How dare she criticise me? What does she mean, smile? Oh god, she’s right! The penny drops. She’s right! The shame!

‘I’m working on sharing my lego,’ she tells me, ‘letting other people come up with ideas for games to play, and also on being less bossy. I’m finding that last one a little difficult,’ she admits.

We make a pact that I’m going to work on patience and my swearing and generally ‘being nicer’ (secretly I’m thinking that this all might be as impossible as unravelling a DNA strand using just a pair of knitting needles.) If only I had started working on improving myself when I was eight.

Who is this child? I think in awe. When we left she was three and in an earlier post from back then I likened her to Pol Pot. She’s now much more Dalai Lama. Well, they do say your children are your best teachers. 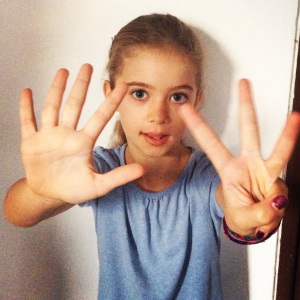 One thought on “A little self-improvement”